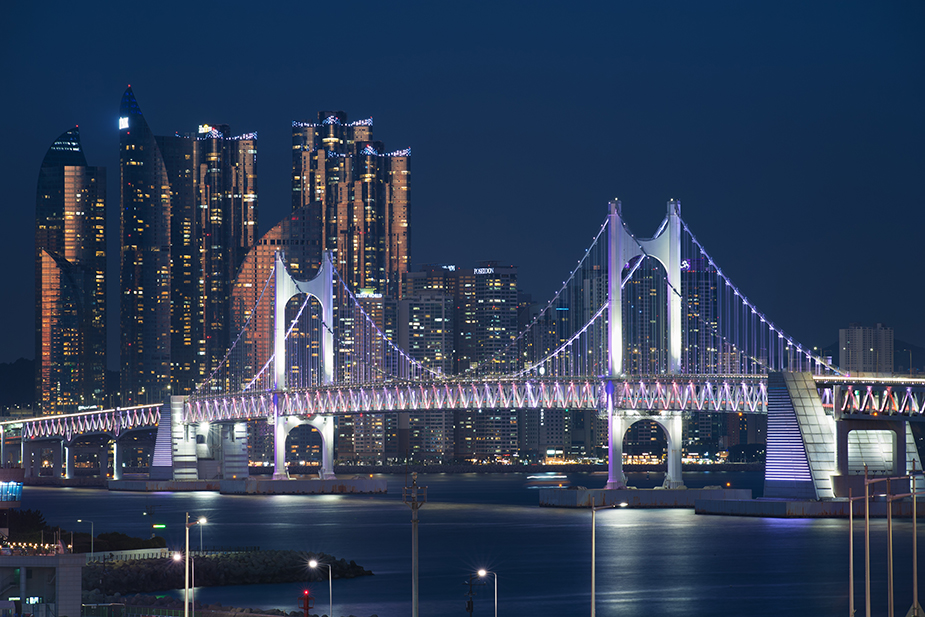 Busan, a bustling city of approximately 3.4 million residents, is located on the southeastern tip of the Korean peninsula. The size of Busan is 770.07km² which is only 0.8% of the whole landmass of the Korean Peninsula. The natural environment of Busan is a harmonious relationship of mountains, rivers and sea. Its geography includes a coastline featuring superb beaches and scenic cliffs, mountains which provide excellent hiking and extraordinary views with hot springs scattered throughout the city. Busan enjoys four distinct seasons and a temperate climate that never gets too hot or too cold.

Busan is the second largest city in Korea. Its deep harbor and gentle tides have allowed it to grow into the largest container handling port in the country and the fifth largest in the world. The city's natural endowments and rich history have resulted in Busan's increasing reputation as a world class city for tourism and culture, and it is also becoming renowned as a hot spot destination for international conventions. Busan, a city of beautiful mountains, rivers and the sea, is also an important cultural city. With the Nakdonggang River bordering the city and picturesque scenery, like that found in Haeundae gaining nationwide attention, the city serves as a major nexus of cultural activities around the region. Busan also is the first international port city in Korea. Its location enables the city to serve as a main gateway for the Korean Peninsula and the entire Northeast Asian region.

Location
Geographically, Busan has the Straits of Korea to its south; Ulsan to the north; and Gimhae to the West. Cities that share almost the same latitude with Busan include Jinhae and Gwangju in Korea, as well as Tokyo, Algiers and Oklahoma City internationally. Busan is eight hours ahead of GMT. As for its geopolitical location, the city is located at the Southern tip of a strip that connects Asia, Siberia and Europe. It also serves as a main gateway to the Pacific Ocean. This strategic location places the city at the center of international sea transportation.

Climate
Busan is located at the southeastern most tip of the Korean peninsula and in the mid-latitude temperate zone, which has seasonal winds. It has four seasons: spring, summer, fall and winter. The annual average temperature is 14.9°C. The annual average precipitation is 1,441.9mm. Busan has strong winds compared to other areas in Korea. Spring begins in March and ends in late June. Cherry blossom trees bloom in late March and the temperature is very comfortable from April to June. The rainy season at the end of June and July signals the beginning of the coming summer heat. The highest mean temperatures of around 32°C are at the end of July through mid-August. Fall is from early September through late-November. The weather is nice and cool at this time because of the continental high atmospheric pressure. Winter starts by the end of November and continues until February, but Busan rarely receives any snowfall. The average winter temperature is 3.8°C. Tourists can enjoy Busan throughout all seasons because of the nice weather and beautiful scenery. In summer, the city, particularly Haeundae and Gwangalli beaches are crowded with visitors who come to enjoy the beautiful and laidback lifestyle Busan residents have come to love.